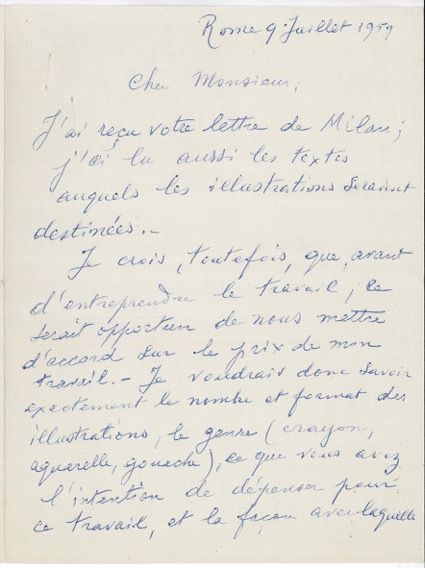 The Foundation has received three handwritten letters in French by the artist of 1959 through the kind donation of an overseas collector. The letters represent a significant contribution to the historical reconstruction of de Chirico’s life and work, an area of study to which the Foundation dedicates particular attention. In recent years, thanks to the discovery of a number of previously unknown correspondences, as in this case, many unknown aspects of the artist’s work and personal life have come to light.

The three letters, addressed to the French publisher Paul Bernard Klein during the second half of 1959, form part of a group of eleven letters regarding a request made to de Chirico for a series of drawings and watercolours on the theme of animals for the illustration of a book.

The generous donation was made in the name of Klein’s son, Jean-Marc Klein, by his heirs, with the aim of conserving the historical memory of the collaboration between the artist and the publisher, which, initially of a professional nature, also reveals a personal understanding and other interesting aspects for the study of de Chirico’s work.

The correspondence will be published in full in the upcoming issue of “Metafisica. Quaderni della Fondazione Giorgio e Isa de Chirico” n. 19 (Italian) and is forthcoming in “Metaphysical Art – The de Chirico journals” n. 19-20 (2020).