Giorgio de Chirico’s House Museum is situated at n° 31 Piazza di Spagna, Rome, where he settled at the age of 60 after having lived in various European cities and a period spent in New York (1936-1938). The artist lived and worked the last 30 years of his life in the three-floor apartment-studio now open to the public.

The Giorgio de Chirico house-museum is open to the public on Mondays, Thursdays, Fridays, Saturdays and the last Sunday of the month. 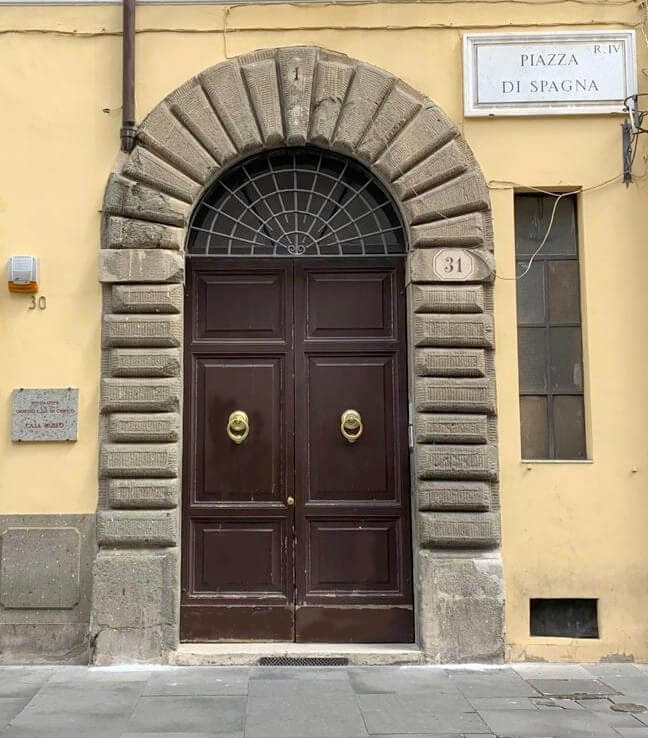 Check our website for  booking your own visit: www.fondazionedechirico.org

The payment will be made at the House Museum on the day of your visit.
A maximum of 15 people are admitted at a time for half-hour visits.
In the event that the number of visitors exceeds this limit, we ask you to send an email to prenotazione@fondazionedechirico.org.

The apartment-studio is composed of the artist’s living quarters, his atelier and a wide terrace on the third floor of Palazzetto dei Borgognoni in the centre of Rome. De Chirico lived the last 30 years of his life here with his second wife Isabella Pakzswer Far, who continued to live in the apartment until her death in 1990.

Having arrived in Rome in 1944 after extensive periods spent in various European cities and a period in New York, de Chirico settled in the apartment in Piazza di Spagna in 1948 at 60 years of age. Enjoying fascinating views of Trinità dei Monti and Villa Medici, the residence is “strategically” situated at the heart of what has been considered the city’s cultural and artistic centre since the 17th  century. The area is home to numerous artist studios and galleries located in Via Margutta and Via del Babuino, as well as Via Condotti’s historic Caffè Greco. At this time in his life, the area represented an ideal place for de Chirico to settle and continue with his work.

Thanks to Isabella Pakszwer Far’s legacy, the de Chirico House-museum is currently accessible to the public. Inaugurated on 20 November 1998 on the 20th anniversary of the artist’s death, the House Museum provides a unique and intimate look into de Chirico’s everyday life as well as an opportunity to enjoy a close-up view of the original imagery of his artwork, in a surprising and evocative weaving of art and life.

The apartment’s rooms and 1950-style furnishings were restored following a rigorous study of old photographs and historical anecdotes. The luxurious rooms on the main first floor provide a Rubenesque vision of grand 17th  century style salons with red damask curtains, ornate gold frames, wooden cherub sculptures, marble tables, silverware and Louis XVI-style armchairs. Conceived as a magnificent “living gallery”, this area of the apartment was once a lively, vibrant place of gatherings and receptions. The artist’s paintings and sculptures are exhibited with the aim of introducing the visitor to the diverse subject matter and themes of his art. The visit begins in the main entrance and living room with a selection of paintings from the 1940s and 1950s, including a number of splendid Great Master copies, portraits of his wife Isabella and self-portraits. One then passes through to the dining room with a selection of still-lifes before entering the extended wing of the apartment (added in the late 1960s) with works executed during the last ten years of the artist’s life, a period commonly known as Neometaphysical Art. Throughout the rooms, gold and silver patinated bronze, gold or silver sculptures convey the artist’s reinterpretation of classic mythical tales borne from his own personal mythology.

Climbing the stairs to the second floor, one gains access to the private area of de Chirico’s home with the bedrooms and his atelier. The latter, restored as faithfully as possible to how it was when de Chirico worked in it, is without doubt the most evocative room of the entire apartment. Light filters down from a wide opening in the ceiling onto numerous tools of his trade – paintbrushes, tubes of paint, frames, as well as the palette used by the artist – are left as if work was about to recommence. A number of plaster casts of classical busts, gladiators and horses sit on top of the artist’s personal reference library which contains precious monographs on Watteau, Courbet, Delacroix and Rubens, among others.

A wide terrace o the third floor (with limited access to the public), is the place where de Chirico loved to pause during the day to admire spectacular views of Rome and nature. What once was the apartment’s kitchen now hosts the Foundation’s office and library, with numerous volumes of the artist’s written work, as well as solo and group exhibition catalogues.