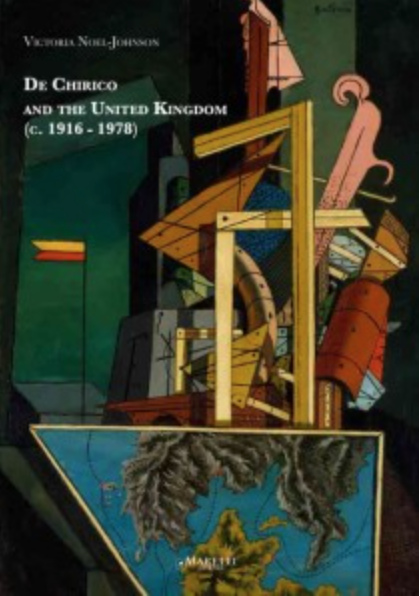 De Chirico and the United Kingdom (c. 1916-1978) constitutes the first in-depth study into Giorgio de Chirico’s lifelong relationship with the country. Detailing over 60 years’ worth of activity through c. 550 documents, this publication establishes the fundamental importance that the UK played in the artist’s career with his work appearing in no less than 85 exhibitions, 49 of which are documented here for the first time.

The recent discovery of extensive correspondence, press reviews and other documentation has enabled a thorough examination of three solo exhibitions held in London (Alex. Reid & Lefevre Ltd., 1938, Royal Society of British Artists, 1949, and Wildenstein Gallery, 1976); successful and failed acquisition bids for de Chirico’s artwork in the public sector, as well as the 1962-1964 controversy involving the Tate’s display of three paintings (on long-term loan from Edward James) that the artist denounced as fake.

The publication also charts the artist’s rapport with key British-based dealers and collectors (including the identification of de Chirico works in important collections belonging to Roland Penrose, E.L.T. Mesens, Peter Watson, Edward James, Arthur Jeffress and Eric Estorick); the reaction in the British press to the artist’s ever-changing work; as well as other collaborations including set and costume designs for London’s Royal Opera House (Le Bal, Ballets Russes, 1929, and Protée, Covent Garden, Russian Ballet, 1938-1939). It also includes transcriptions of the artist’s scarcely-known lecture, The Italian Renaissance and the Present-Day Painter, which he delivered to the Royal Society of Arts in May 1949, and an unpublished manuscript revealing his admiration for Constable (Pensieri dell’Arte, c. 1948).

By establishing the extensive presence of Giorgio de Chirico’s work in the United Kingdom (c. 1916-1978), the publication constitutes a solid foundation for future studies that seek to reassess the artist’s role in the history of 20th century British art, particularly that of British surrealism.